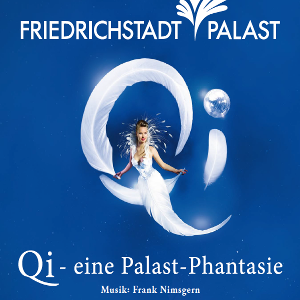 Welcome to the world of Qi! Go with the Friedrichstadtpalast through the gate of imagination and get to know the unique world of Qi. Qi - that power and energy, temperament and emotion, which the Asian philosophy knows - discharges before your eyes in a show thunderstorm of superlatives. Superlatives everywhere: the largest mobile ice rink in the world, the largest flying trapeze artistry in the world, the longest row of girls in the world - the stage of the Friedrichstadtpalast, the largest theater stage in the world, is just big enough for this. In "Qi - a palace fantasy", the extraordinary becomes reality, dreamlike visual worlds are revue-turned-fantasy. Only revue - great show - can merge the top artistic performance and the skill of the artists into a harmonious whole. It is the melting pot where all art forms meet and become a glamorous world of color and music, movement and attraction. "Qi - a palace fantasy" shines like no other show before with master performances on water and on the ground, in the air and on ice. A virtuoso sinking in the color rush that inspires, magic moments that amaze, emotions that remain unforgettable.